I always feel a sense of impotence when I approach the sufferance of others. I feel it very intensively every time I start a new documentary film project, by which I know I’ll face other human beings’ pain: directing social issues’ documentaries since seventeen years I should have got used to that, but no: the same punch in the gut surprises me very time again.

I got in contact the first time with Princess and Alberto in 2015: I was researching for a documentary film about unaccompanied refugee minors traveling alone through Europe, when I realized that many of them become, once they arrive in our continent, victims of sexual trafficking. After a short research I realized the PIAM works is one the leading Italian organizations working on this issue and got on the phone PIAM’s president Alberto Mossino, whom I later discovered to be a true expert on the topic. After some calls and other preliminary work we made up an appointment for some shooting works and interviews in Asti, where PIAM is based.

Here is the topic I was going to work about: very young Nigerian women, often underaged girls, get trafficked to Europe with the promise of a job. Once they arrive here, they’re forced to prostitute themselves for years, experiencing unimaginable violence.
How was I going to approach them? And How was I going to approach Princess Inyang Okokon, a former victim of trafficking and now a strenuous activist for girls who are suffering the same destiny she had? I’ll be honest: I felt a sense of inadequacy and again: the same old punch in the gut didn’t give my any rest on my way to Asti.

That evening I met Alberto and Princess for a dinner at their place: we talked, also laughed and started right away to work. We shot together for two very intensive days, which were the last shooting days I had for this documentary film. Princess and Alberto were professional and well organized, for this reason the work we did together was very smooth. It surprised me and I liked to see that they both have -in different ways- a strong sense of humor, which is contagious and helps a lot in the toughest moments of the work. Already after a couple of hours with them I knew there was much more to tell in their story than the short episode of my documentary film. Their story should become an entire documentary film project on its own.

We started to work on the new thirty minutes documentary film on December 2016, with a commission by the French-German broadcaster ARTE. The shooting works went through the first four months of 2017. This time I was supposed to follow the steps of some girls who just escaped their traffickers, hided in some shelter homes of PIAM through their very difficult, hard path into a new life. But no inadequacy nor impotence paralysed me me this time. At PIAM I realized that it is not about the pain, it’s about the hope. Translating it into my job, it means to tell stories in the most pro-positive way possible.

Oh, I knew that before, sure: you learn this in books and seminars about filmmaking, but believe me: after facing hundreds of terrible destinies you get sometimes lost. Princess and Alberto don’t: if misery and abuse are the present condition, their focus is simply in transforming them in a better, in a good tomorrow. Princess told me once during an interview: “these girls don’t need somebody who just tell them not to go back to the street. They need somebody who protect and guide them, like a mother”. She does it working every day with the passion of a mother getting care of her children – with the same compassion but also the necessary strength to prepare them for the world outside, after the period the girls spend in the shelter homes of PIAM. During another nterview we shot very late in the evening, after a long day of work, Alberto told me: “we don’t save those girls, they save themselves. We only give them the instruments to start a new life: education, knowledge of the Italian language and later a job.

Switching the perspective changed everything and allowed me to forget the victims and see the girls, to stop focussing on the violence, the pain: the gorgeous, funny Nigerian girls I met at PIAM are young woman with clear aims for their future, romantic ideas about their love life and the adorable lightness of every girl living her youth. And yes, they’ve experienced the worst violences the most of us can barely imagine. They will probably carry the traces of that for their entire life, but through Alberto and Princess they have learnt to focus on all the rest of their existence and the hundreds of chances they have in front of them. Switching the perspective, as I saw Alberto and Princess doing all the time, I was able to mett among the “victims of traffic” a very talented singer, a good dancer, an excellent cook, a creative hair stylist and a small girl willing to live her youth again, this time in a proper way.

As a filmmaker this changed my way to tell stories. As a human being I remembered at PIAM how crucial it is to concentrate on capacities and talents of those who normally carry heavy stamps in our society: the migrants, the victims of torture, the trafficked girls. We would discover great personalities behind the pain. In my opinion, this is why Alberto and Princess are still able to be positive laugh while they face the most terrible destinis and and this is the reason why the girls in their shelter homes start to smile again a couple of weeks after they arrive there, although the calls of their traffickers and the many fears they have. AT PIAM they start to concentrate on the bright future they might have if they hardly work on their independence and education. If they’re able to switch the perspective and put their own pain behind them, why shouldn’t I, why shouldn’t we be able to do the same? 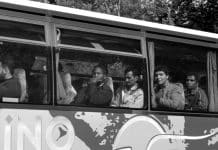 Piam and the receiving refugees. The operational model.