Piam, an onlus from Asti, has been the first in Italy to experience the inclusion of migrants in a family. Now examples of distribution in small groups, across different municipalities whit the support of  associations, has increased. From Genoa to Arezzo, from Vicenza to Milan.

“The widespread reception is a good result model, but just to be clear: it isn’t all peaches and dandelions, sometimes can really lead to friendship, and other times a friction, and in certain cases we must to interrupt the relationship. The hosting in family is a great instrument, but fragile”. The warning comes from Alberto Mossino, the coordinator of Piam Onlus, that from more than a year, and first in Italy, successfully tested paths to involve the families of the territory in the migrants emergency.

“When the asylum-seekers arrive, we settle them in a shelter center where they stay 2 or 3 months, this time is necessary to do a health screening and start the application for the residence permit>>, explained Mossino. So, for who wants it, sthe inclusion in family can start. With the support of the association, that ensures a benchmark operator for the mediation. Then, we continue to follow the people in the process for the asylum application, we insert them in languages courses and we follow them for the medical needs. As well as ensuring the pocket money, 2,50 Euros per day, that are give to the migrants from the 34 Euros per day that we receive from the Italian State to arrange the reception of each”.

“About 62 families currently hosting migrants in Asti, fifty families are foreigners”, say Mossino. But there is another point to highlight: widespread hosting can turn into a welfare tool. On the one hand a refugee, on the other families with economical problem for the crisis, who may have been in Italy for 10 years but for so many reasons risking marginalization and eviction and for which 400 euros a month can give a big help.

The Asti model has inspired the Liguria region, which intends to activate a widespread reception experience. For this reason, the Anci and the Municipality of Genoa organize a day of training for local associations and cooperatives at the end of September (probably on the 23rd at Palazzo Tursi) with the intention of assisting the transition from reception to large complex refugee centers to manage the widespread in the homes of the people. “It was feared that direct management of migrants by private individuals would be unmanageable and at risk of abuse”, said Paolo Pezzana, coordinator of Immigration Commission of Anci Liguria. “But following the Asti model, where there are associations between Prefettura and families, every distrust is overcome”. The new Call for the hosting will be open to private individuals, that will be able to rent empty houses but also to hosting the migrant in family, will published shortly.

Meanwhile in the province of Vicenza, the municipality of Santorso, on August 10 has presented the memorandum of understanding for an agreement between local administrations for the establishment of a territorial network for the widespread acceptance of the applicants for international protection. Among the subscribers, also the Caritas in Padua. “It would be highly desirable for all the mayors to cooperate in this way,” said Don Luca Facco. “The advantage lies in avoiding large concentrations: favoring distribution in small groups, it is less impacting on the territory and at the same time more rewarding for the people themselves.”

At every Municipality, the welcome will always be through the social cooperatives, with the attention to the numbers: a refugee every thousand inhabitants. The important aspect of this protocol is that a mutual commitment has been made, not only tied to the figure of the Prefetto but of entire administration over the reception of the population. From this approach, many mayors are extremely open to sign an agreement capable of identifying and involving serious, competent and reliable managing bodies, and mobilizing all those present in the territory capable of extending a network of real welcoming and arriving at employ refugees for free, community-based activities.

Also in the province of Venice they spoke of a widespread hosting after the draft of an agreement between the Prefettura and 44 municipalities. The document stipulates that each municipality hosts 1,6 migrants per thousand inhabitants for a total of 1.376 people.

Only sharing widespread hosting, principles can ensure the acceptance of the phenomenon and allow for easier integration of refugees by avoiding social tensions. “It will thus be possible to solve the unacceptable situations of Eraclea and Cona”, said the mayor of Chioggia, Giuseppe Casson. An hard no came instead from the Municipality of Scorzè: “We are against the reception of migrants because we feel that there are no conditions for doing it”, while the mayor of Noventa di Piave, Alessandro Nardese, is skeptical: “The quota has been set to 1.6 migrants per thousand inhabitants but since the landings will continue, there is no certainty that this will be the definitive number. And then, how much will they have to stay? The reception experiences we have had in the past were not positive”.

The Diocese of Milan announced a strengthening of the network of host structures managed by its cooperatives and associations, which will bring nearly a thousand refugee seats. Cardinal Angelo Scola has asked Parish priests to provide additional space for families and small groups on the basis of a widespread welcome plan, urging the adoption of new laws and regulations to facilitate integration paths. In order to analyze the relationship between the city and the migrants and the future prospects to deal with the arrival of a new wave, a meeting was held on 4th September at Expo with Don Roberto Davanzo, director of Caritas Ambrosiana, who launched the project “Refugee at my home”.

In Tuscany there are already almost five hundred thousand migrants arriving in one year: only 700 in July. In September, it is estimated, they could rise to six hundred and fifteen.

The widespread hosting model is only achieved through the availability of the Municipalities: each location, depending on the characteristics, size and availability of accommodation facilities, is made available to accommodate a number of people. In the province of Arezzo, for example, the municipalities of Chitignano, Monte Mignaio, Castiglion Fiorentino, Sestino, Subbiano and Badia Tedalda have already given away voluntary collaborations. In the first six months of reception, the migrant can not perform paid activities, but can work in volunteering. It is activated according to the demand for labor on the territory, with great benefit for the community. 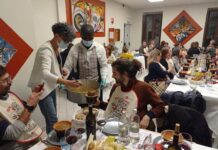